‘What is The Point?’ Jewish Legacy asked in its campaign to get individuals to consider giving to Jewish charities in their will. The campaign questioned the rationale behind today’s Jewish communal organisations, support networks and charities, if, through lack of funding in the future, they were forced to close. Disability charity Kisharon added its weight to the need for legacies with a campaign, #thepointis. Kisharon asked those who are now thriving, or their families, why legacy funding means so much. Here, Ruth Marlowe, whose son, Simon, 38 is supported by Kisharon, speaks out. 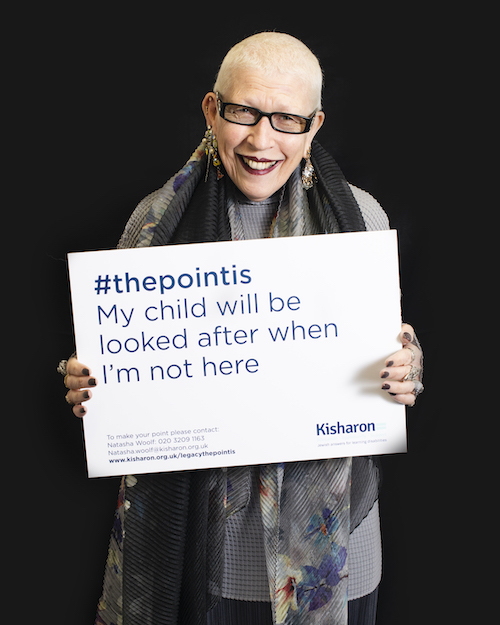 Legacies are hugely important. It’s absolutely vital that people help Kisharon – whether through funding or volunteering. For families like ours, Kisharon’s support is the most important thing.

Simon has learning disabilities, autism and his behaviour can be challenging. I have a daughter, Debbie, 34 who is married with a son and lives in Edgware. When the children were young, Debbie was often cared for by my parents, who moved from Birmingham to help, so I could look after Simon. My husband died when he was 55, and I was 50. I felt he’d left me holding the baby, which was absolutely true of course.

When Simon was five, I chose a local non-Jewish school for learning disabilities over Kisharon. With hindsight, this was a big mistake. The non-Jewish school took on challenging mainstream children who used bad language. Simon still uses these swear words to agitate, although he has no idea what they mean. When he was younger, I would take him to Sainsbury’s or to the children’s services at shul and he would start to swear and I’d have to leave.

These days, Simon has two carers at all times, even when I am with him. At night one carer sleeps and the other stays awake so they can handle any problems.

Kisharon only places male carers with men and women with women and that’s so right. In the past, Simon had women supporting him and that didn’t work. The carers need to be strong because he really can hurt you. Simon has no control over his behaviour, no boundaries to follow and simply acts instinctively.

Life with Simon can be wearing. He will ask the same questions hundreds of times waiting to get the right answer. Once he grew to like a popular female singer and asked if he could live with her. Eventually, one of the staff said ‘yes’ and he got ready to leave the flat. It went on for many months and became an obsession. In the end, we had to tell Simon that this singer was very ill and needed carers of her own.

Over the years, there have been periods when I’ve had to care for Simon on my own; during holidays, when care arrangements have changed or while we wait for funding agreements.  Three times I’ve had to have him sectioned and admitted to a psychiatric unit. Once I simply couldn’t get him out of bed. In spite of this, Simon is loved and adored by myself and the family.

Simon spends most of his days going on outings with his carers. There are more creative activities he could do, take up employment-related tasks or go to the gym but he refuses.

I’m with him three days a week – Wednesdays, Fridays and Saturdays. He likes going to the market at St Albans, and we walk around and go for coffee. Once a week we go to the theatre. Simon has always loved the theatre and knows the etiquette and that he must be quiet. We see musicals in the West End or go to the theatres in Watford, Highgate or Hampstead. Although Simon is generally good with me, there’s always four of us.

Simon can have bad outbursts which can deeply offend people around us. He looks perfectly fine, but when he starts to speak people around us are surprised because you can tell he’s not normal. He cannot read or write.  I’ve told him we’ll call the police, but by the time they’d come, his outburst would be all over. But his behaviour isn’t his fault.

You need to know how to talk to Simon. If he wants to go for a walk and it’s raining heavily, you mustn’t say ‘no’ but: ‘It is raining at the moment but we will go later.’ ...so he thinks he has got his own way.

I did secretarial work when I left school, but stopped when I had Simon. Because I’ve always had him at weekends and holidays even when he was at boarding school, I’ve never had a job. I’ve done plenty of volunteering over the years. I’d like to go on holidays but generally only manage short Sunday-Thursday city breaks.   I wouldn't miss two days of seeing Simon. It would upset him and put him out of routine. Thinking about it, Simon has a fabulous life. He is never lonely. He has two people around him all the time who are kind, patient and have lots of energy - just as he does.

When I think of all the institutions I've been involved with, Kisharon shines out like a beacon. Firstly because it's Jewish. Next because the calibre of the care staff is a million times better than those anywhere else. Above all else, I feel the staff are trustworthy and that Simon is safe. He can’t cross a road on his own, but you know that a Kisharon carer would never let him do that. Safety is always the bottom line. Finally, Kisharon understands, values and is respectful of parents' points of view. After all, as a parent no-one else knows your child better.

If you have any useful tips or information you would like to add to this page please let us know. JWeb is all about sharing, so if something has helped you, please pass it on!