Guest appearances from people doing great things. We want to know what have they learnt along the way, what tips have they got for us, what's made an impression on them, where do they get their information from  …

Oscar Kraft attended West Herts College where he studied for a BTEC in Film and TV. Oscar has NVLD – non-verbal learning disability. He is currently working at Resources for Autism following an enjoyable period as a volunteer. He also works on filming projects with Carousel, a charity that helps learning disabled artists develop and manage their creative lives. Oscar is a panel judge for the Oska Bright film festival organised by Carousel. 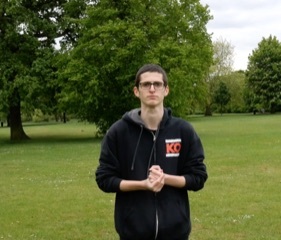 What was your path to doing what you do?

I studied ICT at JFS secondary school and as part of my course I was able to have a go at editing a trailer for a film. I realised that my imagination could run wild! I practiced using the software at home, eventually investing in some serious software in November 2015. By June 2017 I had upgraded my computer and software and was able to edit to a high standard myself.

Who helped you along the way?

JFS worked with a charity called Pascal Theatre who offered weekly workshops at their theatre for young people on the autism spectrum. One of the educational officers – Yaron Lapid – particularly helped me with his advice. I learning to use software called ‘Final Cut Pro’ which was the stepping stone for me to be able to edit my own work.

What have you learned along the way?

Learning something new takes time and patience! You have to really want to do it. Two years ago I was putting up YouTube content without really thinking about the quality and the impression it gave of me. Now I have learning to take my time and can see that patience is key in getting the content right..

Name a book film boxset or play you found inspiring?

Ironically, I can’t follow films; they just don’t sync for me. I find documentaries much easier to follow and grasp. One that particularly stands out for me is Martin Bashir’s interview with Michael Jackson from 2003. The content was difficult, but the way that the filmmakers built the story was engaging. For me, I enjoy recognising the technical side of the film making process such as the edits, the cuts and the use of music and seeing what the editors could have done differently to change the way the viewer sees the subject.

What achievement are you most proud of?

The film I produced for the end of my course in 2019: It’s Come Full Circle. This was my final major project for the course, and I worked on it alone. My idea was to expand on an earlier film I had made about my learning disability. I wanted to intersplice myself and Dr Jonathan Williams talking about my learning disability and how it has shaped me. My lecturer was very supportive, and said that the film felt new and fresh. I had sent it to Dr Williams and agreed some tweaks with him before publishing it online.

I have a fear of speaking in public, which I address in the film, but I felt that it was important to the film to show my face. In the course of the project I had to ‘pitch’ the film to my teacher and an ex-student and face my fear of public speaking.

Do you have a plan or ambition for the future?

For now, I want to keep on doing what I am doing. I love film production and not being tied down to any particular project. I love going to Brighton once a month to work with Carousel on the Oska Bright panel and am really enjoying working at Resources for Autism too.

How do you unwind?

I watch WWE matches online or live (when I can!). Once or twice a year I go to the O2 or a local venue to see a live match. I have a selection of old favourite things I like to watch to relax, and often go for walks.

What hobby would you like to take up if you had the time?

I would like to take up photography if I had the time, and even considered taking it at college.

If you ruled the world for a day, what would you change?

No more war. There is no need for it.

What would you say to someone who has just found out their child has special needs?

Don’t judge. Be patient, because whoever that child may be, they will be fine.

The child will surprise you in ways you can’t imagine.

Who would you like to see featured here? Get in touch and let us know.